Laboratory Chemicals
Laboratory chemicals consist of a wide gamut of chemical compounds that may range from mild to strong acids and bases to simple organic compounds like alkyl alcohols, ethers and phenols to complex, high molecular mass organic solvents and polymeric derivatives. Depending upon their requisite, they can be either used as substrates, catalysts, promoters, solvents and reaction media among other roles. 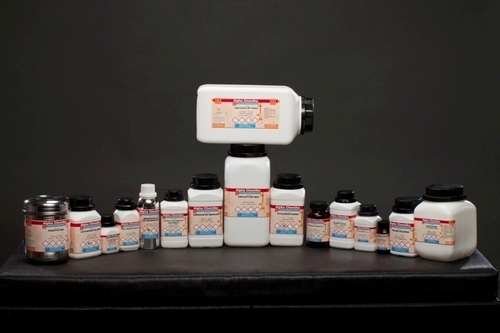 Rare Earth Chemicals
Rare Earth chemicals are those compounds which at their molecular core, one of the 17 very rare elements to be found in nature, whose occurrence is very scarce and are usually dispersed to specific geographical pockets on the planet, and are highly sought after. Thanks to their special physical and chemical traits, they are highly sought after and find widespread usage across varied industrial domains such as automobiles and electronics to name just a few. 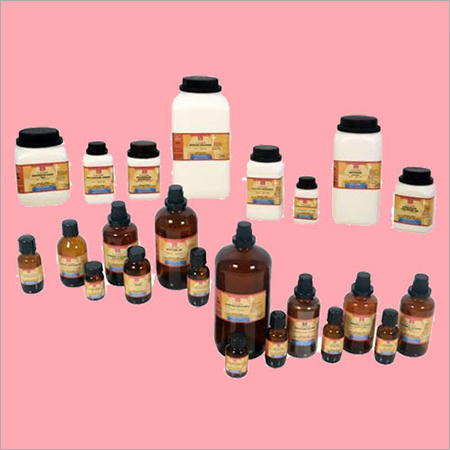 Biological Stains and Dyes
Biological Dyes and Stains are chemical compounds that are used in microscopic analysis of a biological tissues to better understand their cellular structure and organelles by enhancing the contrast. Various cell/tissue organelles selectively pick up a stain, which serves to highlight them and makes their visual analysis easier and get a detailed look at the salient structural features of tissues, cells and cell organelles.

Iodine Derivatives
As is very suggestive from the name itself, Iodine derivatives are compounds of Iodine, both organic and inorganic in nature and can occur in any of the three commonly encountered states of matter. Being one of the heaviest elements on the periodic table that is stable, Iodine forms a wide array of compounds that serve as substrates, catalysts, intermediates and promoters in a number of industrial processes.

HPLC Solvents
As is clearly understood from the name, HPLC Solvents, also known as High Purity Liquid Chromatography Solvents, are employed in chromatography processes that are used to separate, identify and quantify the chemical components present in a solvent. In the process itself, they are referred to as the 'mobile phase', and their constitution and temperature play a major role in dictating the net effectiveness of the whole process and generation of desired results.

Metallic Salts
Chemical compounds that are made up of positively and negatively charged ions held together by electrostatic forces of attraction called ionic bond are known as salts, and when the positively charged ion happens to be metallic, the resulting salt is known as metallic salt. In addition to their common household utility, they are also known to be of particular utility at industrial utility, where they are used as substrates, catalysts, etc. 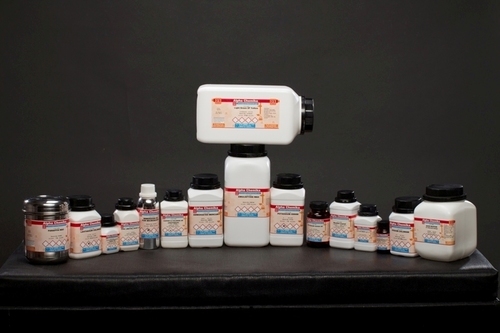 Silver Salts
Silver Salts are compounds of silver that contain a negatively charged inorganic groups (halides, carbonates and nitrates among others) or residues/derivatives of organic acids (acetates, lactate, carbamates, etc), and are highly sought after for their chemical characteristics in industrial processes. They are widely used for processes like electro deposition of silver on surfaces, making high capacity silver batteries and chemical analysis and confirmation of presence of certain elements in a solution. 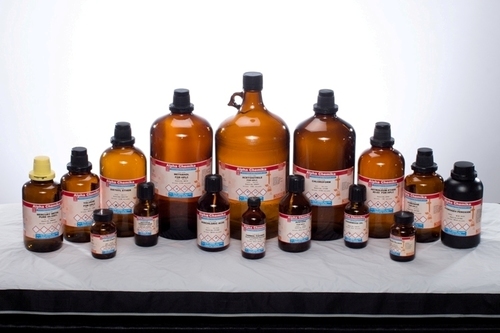 Mercury Salts
Among the most widely used chemical compounds whose usage spans across varied industrial sectors ranging from electronics, automobiles and pharmaceuticals, Mercury Salts are one of the most versatile compounds known to mankind. Mercury salts usually in form of halides, with the most common example being calomel, which is a chloride, but other forms with different groups can be synthesized too, by simple addition, substitution and oxidation/reduction reactions. 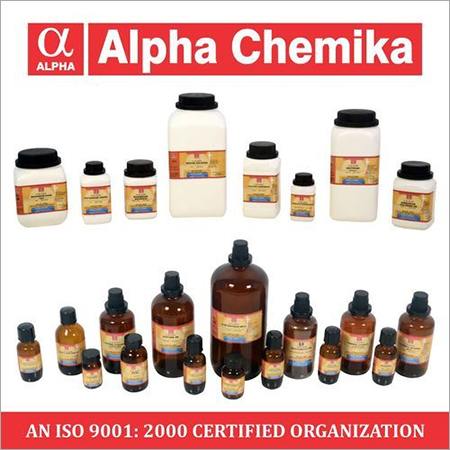 Redox Indicators
Redox Indicators are chemical compounds that show a variation of colors on different values of electrode potential, and thus , only a selected class of chemicals which exhibit the desired kind of reaction mechanics and electrical behavior can be used in the aforesaid role. The major condition for being a redox indicator is that the reaction path followed must be reversible. 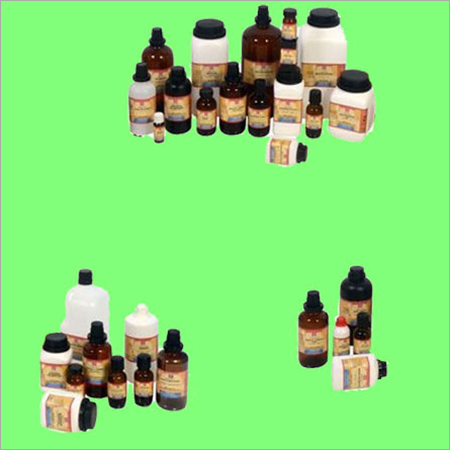 ION Pairing Reagents
Ion Pairing Reagents work via the mechanism of retention and are utilized in chromatographic processes in the capacity of mobile phase additives for separation of ionic and highly polar solution constituents. These reagents work by forming a neutral pair of ions, thanks to the electrostatic pair of attraction that develops between the ions of the mobile phase and the sample species. 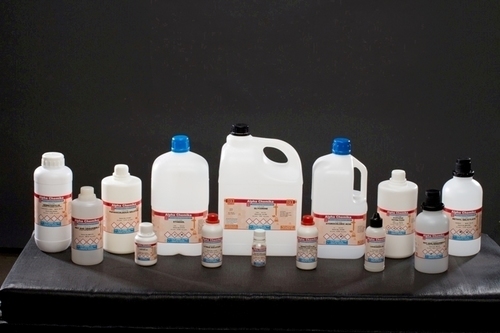 Ketones
Widely used as polymers precursors and solvents in industrial chemistry and also finding impressive usage in the domain of pharmaceuticals, ketones are one of the most versatile group of organic chemicals, with acetone and cyclic ketones being a major example. Industrially produced by oxidation of oxidation of hydrocarbons, ketones find utility in varied industrial sectors.

Phenols and Derivatives
Phenols and their derivatives are characterized by the presence of an aromatic ring with an hydroxyl/alcoholic group attached to it, they are one of the most versatile group of organic compounds, thanks to their wide usage scenario. Not only pharmaceutical and medical sector utilize them, but also agrochemicals, cosmetics and rubber industry are where they are used in high quantity.

HPLC Buffer Salts
One of the most well known methods of separation, identification and quantification of individual liquid components of a mixture in analytical chemistry, HPLC makes use of variety of buffer salts to maintain the pH of the solution at a constant level. It also helps in keeping at bay the variations that may be observed in retention and selectivity, which makes it all the more important to select the right buffer, as they also help to combat the selection evaporation of volatile reagents. 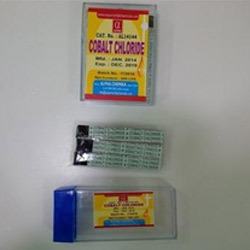 ph Indicators Papers
pH Indicator Paper, as is clearly apparent from the name, are papers that are used as indicators to show a change in color and help in estimation of pH value of a given test solution. They come dipped in varied kinds of indicator solutions, each of whom exhibits color change in a particular range of pH values, which is also known as their transition value.

High Purity Acids
High purity acids are one of the most sought after class of chemicals, which are known for their exceptionally high chemical purity and far superior kinetics, reaction mechanics and concentration variables like normality, dissociation & ionization variables, molarity and molality among other parameters. They are known to be highly effective in analysis of trace metals and are used in the roles of substrates, catalysts and promoters among others.

Acrylic Monomer
Generally referred to as plastics and serving as precursors for a variety of similar polymers, Acrylic monomers are derivatives of acrylic acid, and are known to undergo polymerization with relative ease to form varied compounds. A very common derivative of theirs acrylonitirile, which is basically an acrylic group occurring in conjugation with a nitrile group, and has wide industrial applications. 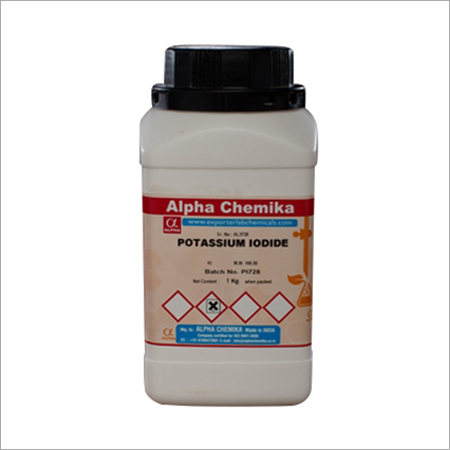 Potassium Iodide
One of the most widely used and heavily synthesized inorganic chemicals in the world, Potassium Iodide is a crystalline organic compound that has a vast of industrial applications, and is used in synthesis of diverse organic and inorganic compounds. In addition to it, they are also widely used in the medicine and health care sector to treat a number of thyroid related diseases. 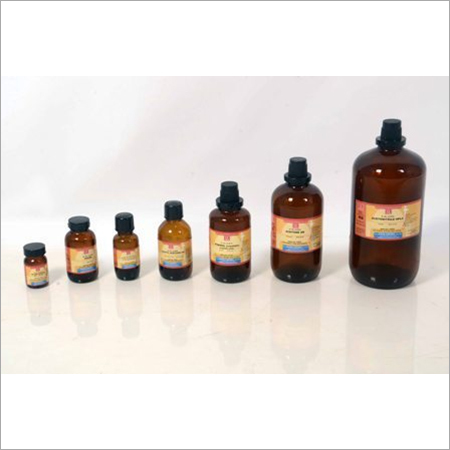 Inorganic Acid
Also known as 'Mineral acids', Organic Acids are a group of chemicals that have been synthesized from one or more inorganic sources, and are known for furnishing a hydrogen ions (or producing hydronium ion) in a solution. Apart from their varied used in laboratories, they are widely used in a number of industrial synthesis processes of a diverse array of compounds. 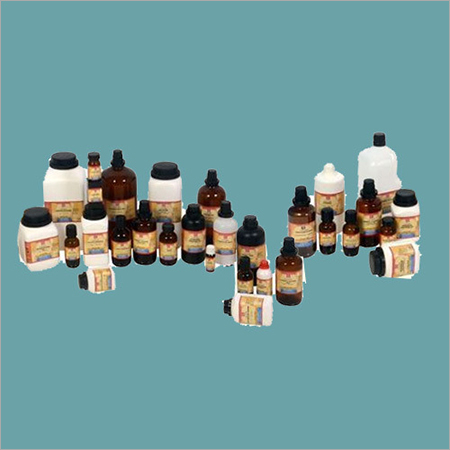 Buffer Tablets
Buffer Tablets, as is clearly understood from the name, are chemical agents that are used to maintain a constant value of pH in a given solution, so that it resists change in pH value even after addition of acids and bases. They can be slightly acidic or basic in their chemical nature, and are widely used in a number of industrial synthesis processes. 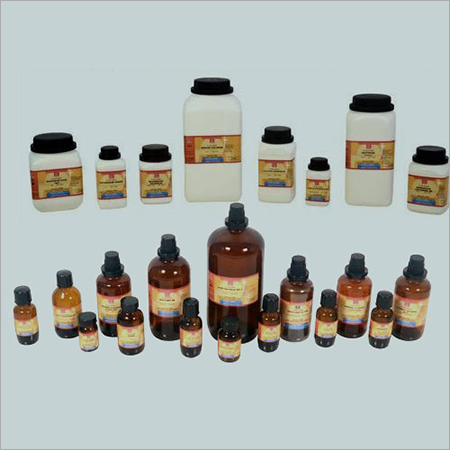 Ph Indicators and Solution
Indicator Solutions and Dyes are weakly acidic solutions that are used in analytical chemistry and biological reaction studies to determine the concentration of Hydrogen ions in a solution and estimate the pH value. They are usually halochromic and weakly acidic in nature, and the color change in them is all on account of the loss of Hydrogen ions from them.

Esters
One of the most diverse class of organic compounds with vast industrial application areas, Esters are characterized by the presence of an alkoxy group in their carbon chain, and are widely known for their distinct role in biological chemicals. They are well known for their volatility, which makes them an ideal choice to be used in perfumes and deodorants. 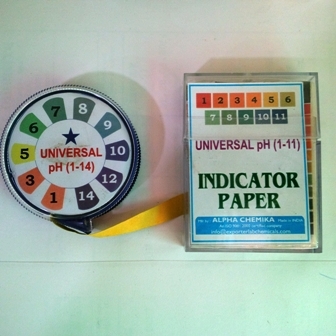 Indicator Paper
Indicator Paper is a kind of paper that is used in identifying the acidic or alkaline nature of a solution, and also provide an idea about their levels by exhibiting distinct color changes and smooth transformation of colors on exposure to the test solution.. They are readily available in form of strips and the spectrum of colors obtained on putting them in contact with a solution ranges from red and yellow to green and violet.

Inorganic Chemicals
Inorganic chemicals are a special class of chemical compounds that are distinguished by the absence of carbon in their molecular as the principal forming element, and usually contain metallic and gaseous elements in them, although the states can vary. They are usually employed as pigments, catalysts, coatings, surfactants and promoters among others, and are heavily brought to use at industrial scales in synthesis of other compounds.

Alcohol
There is hardly any organic functional group that has as many diverse usage scenarios and chemically as well structurally different variants, with all of them being identifiable by the presence of a hydroxyl group attached to a saturated carbon atom. Isoamyl alcohol is an isomeric form of the amyl alcohol and has a wide range of uses, which include its utilization as an anti-foaming agent, bacterial diagnostic tests and inhibition of RNase activity with in bio-molecular reactions.

Organic Acid
Organic acids may be defined as those organic compounds that are know to show acidic characteristics much like their mineral acid counterparts, albeit to a much lesser extent in terms of dissociation and gross corrosive effect. Not only are they used in the food industry for accomplishing the task of preservation, they also find wide usage in oil & gas industry, biological research and industrial chemistry among others. 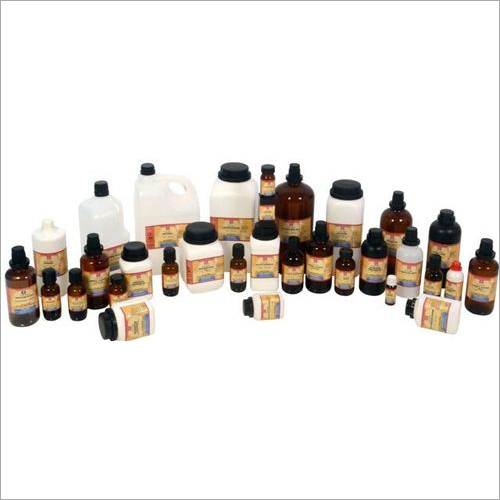 We are deals in Lab Chemicals.
"Only deals in retail accepting orders upto 500ml only".
×
Enter Buying Requirement Details
×
Share additional details for a quick response
×

For immediate response, call this customer.